I have been reading up quite a bit about the general attitude towards the Northeastern citizens of India. Over all there seems to be discontentment, anger, frustration, etc in all the blogs or articles I’ve read written by someone from this region or by some well wishers sometimes too! I too have written about it & discussed it countless times with friends and acquaintances. Then suddenly an odd realization jumped in! You know how wise men say that if you can’t accept yourself, you won’t have space in your hearts and minds to accept others… Well, this should hold true for the supposed sufferers and the supposed inflictors. I recollect being in Khwairamband bazaar (Imphal) quite some years ago where I had a conversation with this shopkeeper. He was Sikh & had been living in Imphal for many years. He made no qualms about poking fun of my terrible Manipuri language(Meiteilon) skills! But the fact is that he was more Meitei than I was. If you didn’t see his face, anyone could mistake him to be a native. Even his Hindi accent was like the rest of the locals! He said he lived in the city and not in the outskirts. This got me thinking… I don’t know of any non Manipuri neighbours! Did I have any? All my neighbours near my home in Imphal were Manipuris… No Bengalis, no Maharashtrians, no Assamese, no Tamilians, no Punjabis…only Meiteis! The non Manipuris were confined to the inner city limits where it’s over crowded like any other city centre would be. In fact theres a general hostility sometimes towards outsiders or Mayangs. The word Mayang means outsider & it is often used as a derogatory term. We are so hostile towards having other people come into our localities to settle…there aren’t many of them any way. So why is it then that when we go to other parts of the country, we expect they locals there to welcome us with open arms from day one! How is that possible now? Is it really a balanced view? Are we not taking up jobs & space in other parts of the country? Are we not taking up seats in universities across the nation as there are none or limited colleges / universities available in the NE region? If its fair that we occupy these educational and professional spots based on our qualifications & abilities, then we should take it upon ourselves also to show the locals of these other regions that we can mingle with them & become part of the overall productive community. Perhaps we can all learn a thing or two from the Parsi community. Story goes that when the Zohrastrians first landed in India, they were accepted into the community as their leader clearly stated to the local ruler that they’d settle there & enrich the land just like how a spoon of sugar enriches a cup of milk!

The regional hostility is something thats not a very different story in other parts of NE India…in fact it is the same story right across the length & breadth of our country. The news media is constantly showing us how some communities are fighting sometimes vigorously so to keep their communities free of outsiders. Everywhere you go, you can see it happening. In some parts of Mumbai, non-vegetarians aren’t allowed to rent property in Jain/Gujarati dominated areas. Southern India is still wary of northern Indians who come to settle there…  There are so many of such cases that I’m confident I could write a book on each region of India & perhaps this one life time wouldn’t be enough for it. This hostility is lesser now in urban areas but the feeling of being suspicious of outsiders still remains in most rural areas. It is just part of our national DNA I guess and History has given us enough reasons to be this way.

I don’t support discrimination against any community based on their religion or color or race, let alone cultural practices. I’m not learned enough or qualified enough or God to make these judgements. From my own experience I’ve learnt that the day I stopped seeing myself as an outsider, I was welcome everywhere and I ceased being a ‘chinky’ and became an Indian. My curiosity about other cultures led me to mingle with the people of other communities and not just my ‘types’ and I’ve met so many truly amazing people. Till the time my friends understood or knew about my cultural heritage they too were wary of me, as was I of them but once that bridge was crossed there was no looking back. The friendships I have gained can be termed as nothing short than amazing! I’ve learned so much from my friends from across the country & we still continue to learn from each other. They are as amazed by Northeastern india as I am as I’m yet to physically discover each and every corner of this fantastic region. In fact there’s so much to learn from every part of the country. I love that everywhere you go in India, each city, each village has something unique to offer. It could be the language, the dress, the music, the religion, history, cuisine… Oh my goodness the cuisine across the country is so amazing. Its a pity that the rest of the world hasn’t yet discovered the stunning diversity of cuisine completely. We are so uniquely diverse yet so similar in a thousand  lovely ways. Instead of shunning our differences, we should be celebrating them and rejoicing our similarities. Then and only then will we cease to be outsiders amongst our own people & our true potential as a nation be realized. 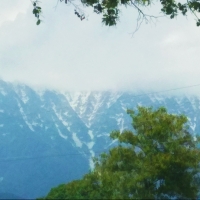