Tell us about your favorite childhood meal — the one that was always a treat, that meant “celebration,” or that comforted you and has deep roots in your memory.Free free to focus on any aspect of the meal, from the food you ate to the people who were there to the event it marked.

Today’s twist: Tell the story in your own distinct voice.

I love food and thats pretty much that. I could write about the fish curries and the little known Manipuri cuisine or the amazing feasts in Imphal or the chicken curry my mother cooks..etc etc I could go on and on but there’s one particular dish or rather a snack that has special significance. I’ve not had it for the longest time now. Maybe next time I’m with my mother.

I used to dislike cheese with a vengeance till this particular point in my life. It was my 15th birthday! It was the end of the year and nothing much had been planned for the upcoming christmas break. Couple of weeks before that I knew my mother would simply invite my friends over for some delicious dinner – noodles, chicken, paneer, some type of sandwiches, maybe even idli(south indian rice dumplings) and sambhar(south indian spicy lentils). It was a delicious thought to play with. Unfortunately around the time of my birthday a rather nasty communal incident brought the whole nation to a grinding halt. It was curfew time and that meant no birthday party happening much to my dismay. But moms have a tendency to make things work I guess.

My friends who were quite bored of sitting at home for a few days now decided that they’d just drop in for a cuppa chai. We all lived in a gated colony so it wasn’t too much of a task to get to each others place. Turns out that all my friends were thinking the same thing! My parents were a bit surprised at the random turn up that evening and my mother had to quickly whip up some snacks to feed the junta! Thats when all the 6-7 tins of cheese…yes I did write tins of cheese for you didn’t get cheese in any other form in India back then in the Army ration… so thats when all those tins finally came of good use! Prior to this cheese tins found their way as gifts to cousins and family friends who would stop over in Kolkata before heading to other parts of the country. Before we knew it, my mom had whipped up a cheese & chai storm in the kitchen. She made cheese pakodas/fritters and with such flair! I just had to put my dislike to rest as they were really scrumptious!!! And that was the beginning of my love for cheese. Maybe it was just the situation under which we celebrated for there wasn’t much to celebrate at that point in time owing to all the communal violence. And so this little deep fried snack for a couple of hours made us all forget the world and just enjoy the moment together.

Cheese pakodas made by Mama were and still are the bestest way to beat the blues. It was the best birthday party I’ve ever had and I have also managed to find an old rescued photo from that day to show you guys! 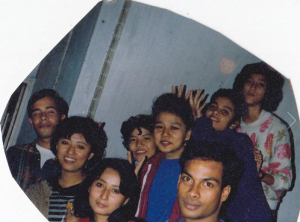 Curfew birthday…I’m 4th from the left at the back!